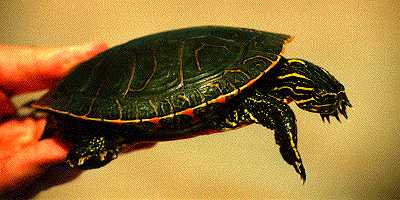 The painted turtle (Chrysemys picta) is the most widely distributed North American turtle, and the only one to range across the entire continent, occurring from southern Canada to northern Mexico and from the northwestern to the southeastern United States. They are small turtles with an adult carapace length of 4-10 inches (10-25 cm). The carapace is a smooth, flattened oval, and is green to black in color, with red markings in some sub-species. The plastron is generally yellow, sometimes tinged with red, sometimes with a black to reddish-brown figure of varying size and shape. The skin of the painted turtle is black to olive with red and yellow stripes on the neck, legs and tail and yellow stripes on the head. Males have elongated foreclaws and long, thick tails. Females have shorter foreclaws, shorter and thinner tails, and tend to be larger.

The eastern painted turtle, C. p. picta (Schneider, 1783), ranges from southeast Canada through New England and down to Georgia and eastern Alabama. It is usually 5-7 inches (12.7-17.8 cm) long, and the record is 7.1 inches. This turtle is unique in that the vertebral and costal scutes run virtually parallel, so the light bordered seams are aligned across the carapace. On all other North American turtles, the seams alternate. The plastron is usually plain yellow. In the coastal portions of its range, it may be found in brackish tidal waters.

The midland painted, C. p. marginata Agassiz, 1857, ranging from southern Quebec and Ontario to the central US, eastward to New England, Pennsylvania to West Virginia and Maryland, is similar in size to the eastern painted. It has dark borders around its alternating carapacial seams, relatively ornate marginal scutes and a dark figure on its plastron.

At about 5 inches (12.7 cm) long, with a record of 6.1 inches (15.5 cm), the southern painted turtle, C. p. dorsalis Agassiz, 1857, is the smallest subspecies. It ranges from southern Illinois and Missouri along both sides of the Mississippi River south to Louisiana and eastward to Alabama. It features a conspicuous red, orange or yellow stripe running the length of the carapace, and has a plain yellow plastron.

The western painted turtle, C. p. bellii (Gray, 1831), is the largest subspecies. Adults are often over 7 inches (17.8 cm) long, with a record of 9.8 inches (25 cm). It ranges from western Ontario to British Columbia south to Missouri, northern Oklahoma, eastern Colorado, Wyoming, Idaho and northern Oregon with isolated populations in Texas, New Mexico, Arizona, Utah and Chihuahua, Mexico. Its green carapace features a network of faint markings. Its yellow or reddish plastron is marked by an intricate dark figure branching along the seams.

Where their ranges overlap intergrades, exhibiting a mix of subspecies characteristics, occur. Because they are often kept in mixed company, hybrids produced by matings between different subspecies are common in captivity.

Wild painted turtles prefer slow-moving shallow waters of ponds, marshes, creeks and lakes with soft, muddy bottoms, with suitable basking sites and ample aquatic vegetation. Painted turtles are diurnal, spending the nights sleeping on the pond bottom or on a partially submerged object. They become active at sunrise and bask for several hours before foraging for food in late morning. They may forage again in late afternoon into early evening.

The basking habit is well developed in painted turtles. As many as 50 turtles have been observed on a single log, often stacked atop each other in several layers. Even hatchlings can be seen basking. Basking in the sun serves several important purposes. The heat helps maintain the preferred body temperature. The sun's ultraviolet helps eliminate skin parasites and is essential for the synthesis of vitamin D3.

Courtship is quite graceful and occurs from March to mid-June. The male slowly pursues the female, swimming past her and turning to face her. He strokes her head and neck with his long foreclaws which he moves in a trembling motion. If receptive, she responds by stroking his outstretched limbs with her foreclaws. The male swims away apparently trying to entice her to follow. Eventually the female sinks to the pond bottom where mating takes place.

Nesting occurs from late May to mid-July. The female prepares a flask-shaped nest in slightly moist loamy or sandy soil at a sunny site near water. The number of eggs laid varies from 2 to 20, differing among the subspecies. Incubation in nature and in captivity averages 76 days.

Hatchlings emerge from the egg with the help of the caruncle or eggtooth. The caruncle drops off a few days after hatching. The hatchlings have a keeled shell and an abdominal fold, both of which disappear as they grow. Their shell pigmentation and markings are brighter and more pronounced than those of adults. They mature about five years after hatching and are thought to live as long as 20 years.

Since painted turtles range so extensively, they are found from the coldest-winter to the warmest-winter regions of the United States. The more northerly subspecies brumate regularly and for a longer period than their southern cousins. It is possible that southern and western painted turtles living in the most southerly reaches of their ranges do not brumate. 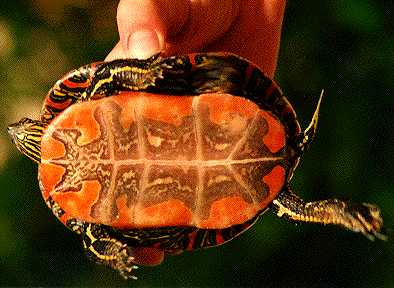 Because of their small size and adaptability to captivity, painted turtles are often kept as pets. They have interesting individual personalities and often exhibit comical behaviors. My three painted turtles live in a four-foot-long aquarium fitted with a Vitalite, incandescent light, canister filter, heater, slate basking platform/hiding tunnel and large pebbles covering the tank bottom.

The western painted male (carapace length 5.25 inches, 13.3 cm) came from the pet trade. He was my first turtle and has taught me more than he will ever know. He is by turn very tranquil and very "squirrelly", but generally seems quite content. He spends at least as much time basking on the slate platform as he does swimming in the aquarium, occasionally even sleeping on the platform.

I have 2 two-year old midland painted turtles (3 inches and 3.25 inches), which came from a CTTC member. They are intensely squirrelly, becoming agitated at the first move towards them. This vigilance must have great survival value in the wild. They enjoy basking, and frequently climb atop the western painted, whom they seem to regard as a role model. Even in the water the midlands "hang-out" with the western painted rather than elsewhere in the aquarium.

My painted turtles eat almost anything I offer them, although they seem less fond of live food (feeder fish, mealworms and nightcrawlers) than the other aquatic turtles I keep. Whole fresh smelt (when I can get it) is their all-time favorite. They also enjoy other freshwater fish (they don't care for saltwater species), floating food sticks, trout chow, carp pellets and Elodea (an aquatic plant). I dust thawed frozen-smelt ("smelt-sicles") with vitamin supplements (Vionate or Vitalife), because this food is not particularly wholesome. I feed them in a separate "dinner tank" to help keep their aquarium clean.

Four years ago, shortly after he was acquired, the western painted developed an abscess between a vertebral and two costal scutes, manifested as a lifting of the scute corner as he dried off while basking. Our local reptile veterinarian discovered the abscess and prescribed antibiotics. Untreated, the infection could have spread. The turtle was kept in a dry "hospital tank" (fitted with Vitalite, incandescent light, reptile heating pad and rocks) for a month, going into water only to eat and drink once a day. After being in water, his wound was washed with Nolvasan disinfectant and fresh antibiotic ointment was applied. As the infection cleared and dead tissue sloughed off, white bone became visible underneath. Chelonians are notoriously slow to develop problems and equally slow to heal. The veterinarian felt that a fiberglass and epoxy patch was necessary to protect the area, because it would be years before the shell healed completely. Though he had applied fiberglass/epoxy patches to several wounded tortoises, this was the first aquatic turtle he had attempted to patch. There was nothing to lose and much to gain, so he applied the patch and we all hoped for the best.

The western painted turtle's response exceeded our wildest hopes! As the turtle was returned to his element, his delight was unmistakable. He swam, basked, ate and grew as if making up for lost time. Each year for 3 years, the patch fell off as the turtle continued to grow. Finally, as the last patch fell off, complete coverage of the affected area by new dark growth was evident. Today, only a small pitted area remains where the life-threatening abscess had once been.