A Most Amazing Animal, the Green Sea Turtle

by Gregory A. Forbes 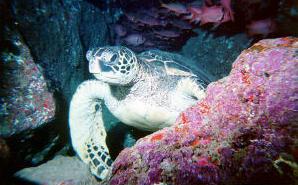 Sea turtle, seen off the coast of Maui, Hawaii.
Photographs by Art Ogden

Which turtle species lays the greatest number of eggs? Which turtle may migrate over 1000 miles to nest and may fast for over four months? Do you know which turtle navigates by magnetic cues and is the second largest turtle species in the world? Which species of turtle may lay a single clutch of eggs that were fertilized by multiple males? Can you name a turtle that is found in Africa, South America, Asia, North America and Hawaii and belongs to one of the oldest fossil turtle groups? Which turtle has been called the world's most valuable reptile?

If your answer to all of the above questions was the green sea turtle (Chelonia mydas), you can pat yourself on the back. The green sea turtle is one of seven species of sea turtles and the largest of the Family Chelonidae that includes the loggerhead sea turtle (Caretta caretta), the hawksbill turtle (Eretmochelys imbricata), the Kemp's or Atlantic ridley (Lepidochelys kempii), the olive or Pacific ridley turtle (Lepidochelys olivacea), and the Australian flatback (Natator depressa). The Family Dermochelyidae is composed of a single species, the leatherback sea turtle (Dermochelys coriacea).

Although the green turtle has been a very important source of meat, eggs, and ornamentation for many maritime communities for centuries, only recently (circa 1950's) have we taken the time to study the natural history of this animal. Our latent interest in investigating the biology of this animal has been due, in part, to the logistical difficulties of studying a marine animal that may range over many hundreds of miles of ocean and across many international boundaries. Although studying sea turtle populations is not easy, a more important factor influencing our low priority assigned to sea turtle studies has been the optimistic attitude that "there will always be more sea turtles." We are now painfully aware that this is not going to be the case with the endangered green turtle. As a result, many governments and private marine turtle research projects are now underway along every continent in both hemispheres.

Following the pioneering work of Dr. Archie Carr in the mid 1950's, a great deal of information has been gained about the unique natural history of the green sea turtle. Life for this curious creature begins more than two feet below the warm beach sand as the entire clutch of more than 100 eggs begins to hatch after about two months of incubation. After spending up to 48 hours absorbing their yolk sack, the activity of the clutch increases as they struggle to reach the top of the nest and free themselves of the sand. Their activity continues unless the sand temperature is too warm at which time they overheat and become torpid. This is why most nestling emergence occurs in the evening or on overcast days when the sand temperature is cool enough to allow the hatchlings to escape from their nest.

As amazing as the emergence of the hatchlings from the nest is, even more astonishing events have occurred deep in the nest prior to hatching. While the gender of most vertebrate animals is determined at conception by the presence of sex determining chromosomes, sea turtle sex is determined by the temperature of the sand during incubation. Warm temperatures (>29° C) produce more females while cooler temperatures (<29° C) produce more males.

Those hatchlings that are successful in their journey to the open sea will spend the next several years in a planktonic-like lifestyle in which currents will have an important influence on where they will find themselves. During this time, the hatchlings most likely feed upon both plant and animal material to gain size and weight rapidly. This rapid weight gain may decrease their chance of falling prey to predators. Although the estimates vary widely, it is likely that less than 1% of the hatchlings will ever reach sexual maturity. After several years, the young turtles will move into one of many inshore developmental habitats where they will spend the majority of their hours feeding on sea-grasses and algae with the occasional jellyfish snack.

Some individuals may spend more than 10 years in their developmental habitats before they arrive at, or possibly choose, their adult feeding ground where they will most likely spend the remainder of their adult life feeding until they are large enough to breed. 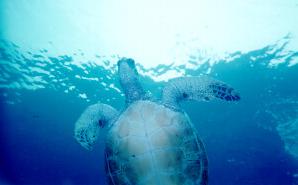 Sea turtle, seen off the coast of Maui, Hawaii.
Photographs by Art Ogden

Green turtles may breed for the first time when they are between 25 to 50 years old. This figure is apparently variable throughout the range of the green turtle and is a function of the diet of the maturing turtle.

When sexually mature, both male and female green turtles will migrate from their resident inshore feeding grounds to the courtship areas that, for some populations, may be more than 1000 miles away. These courtship areas are located close to the nesting beaches and will provide a place where migrant males and females can mate. It is interesting to note that those turtles that live near the courtship and nesting areas rarely breed in these areas but rather migrate great distances to other breeding areas. Is this an example of the grass always being greener on the other side of the hill (ocean)?

After a female has bred with many males and vice versa, the female will crawl up a low sloping sandy beach to lay a clutch of eggs which have been fertilized by multiple males. This is usually done at night in order to take advantage of the cooler temperature as the >400 lbs female may otherwise overheat during her crawl and nest excavation. Using her hind flippers, the female digs a vertical pit up to 2 1/2 feet deep in which she deposits over 100 eggs the size of small billiard balls. The nest chamber is then covered using all four flippers. The entire nest digging and laying process may take over four hours as many "false nests" may be dug and abandoned before the eggs are actually laid.

After the nest has been disguised, at least in the mind of the turtle, she returns to the waters directly off shore from the nesting beach. She will stay in these adjacent waters for the next two weeks during which time she will not feed. After approximately two weeks she will crawl back up to the same area of the beach to deposit another clutch of eggs. She may repeat this cycle more than seven times during the nesting season with some females laying only several nests during the season.

At the end of the nesting season the female will travel back to her resident feeding ground at which time she will continue to forage in order to gain enough weight to reproduce again. This will usually require more than four years as a great deal of fat must be deposited to power the energy demanding swim to the breeding grounds, the production of up to 800 eggs, the fasting during the nesting season and the subsequent return swim to her resident feeding ground. For this reason, female green sea turtles will normally require at least four years between nesting cycles.

Since green sea turtles feed in shallow coastal areas, they can be captured with nets, spears, and gaffs with relative ease. When the female crawls onto the beach to nest, she and her eggs are easy prey for any turtle hunter. Those few countries that provide protection for sea turtles cannot stop the decline of the sea turtles as sea turtles do not respect international boundaries during their migrations. They may spend up to 50 years maturing in a country where they are afforded protection only to migrate to their breeding grounds in another country where they will be hunted.

Those of us who conduct research on sea turtles are hopeful that someday sea turtles will be protected from commercial take in all countries. Until that day arrives, many hundreds of thousands of sea turtles are being taken per year around the world. Although the green sea turtle has been on this planet for over 130 million years, at the current rate of exploitation, it may not survive the next generation of hungry humans.