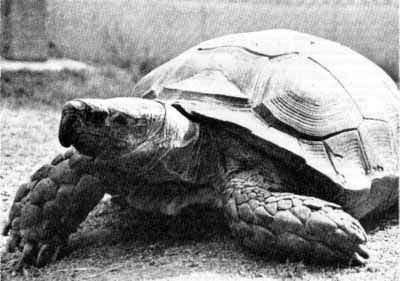 This is the largest Asian tortoise and may reach a straight-line shell length exceeding 18 inches. The front of the forelimbs are covered with large, heavy, overlapping scales. Additionally, there is a grouping of very large tubercular scales on each thigh. The thigh scales are so pronounced that this species is sometimes referred to as the "six-legged" or "six-footed" tortoise. Because of certain characteristics such as a broad, flattened shell, wide nuchal scute, paired supracaudal scutes, and a preference for cool, moist habitats, the Asian brown tortoise is believed by Walter Auffenberg of the Florida State Museum, to be one of the most primitive species of tortoise.

Manouria emys emys, commonly called the Asian brown tortoise, is distributed from Assam and India, through Malaysia to Sumatra and Borneo. Manouria emys phayrei, usually referred to as the Burmese forest tortoise or Burmese mountain tortoise, occurs in Burma and western Thailand.

Much of the range of this chelonian is in upland parts of Asia in temperate, moist forest habitats that come under the influence of monsoon rains. During the warmer parts of the day these tortoises prefer to soak in pools or to remain in the shade, out of the sun's rays. During the 20th century these tortoises have been recorded from India, Bangladesh, Burma, Thailand, Malaysia, and Indonesia. Their status varies from country to country. Because of their heavy exploitation by humans, they are now a species of special concern. One bright note, as far as conservation, is that in parts of Malaysia they may occasionally be found in turtle temples.

Little is known about the day-to-day life of this species. In the wild these large tortoises are chiefly herbivorous. Much of the recent natural history information has been compiled by Ed Moll of the IUCN/SSC Tortoise and Freshwater Turtle Specialist Group.

At various times in the exotic pet trade in the U.S. one or the other subspecies of Manouria emys was more readily available to zoos and hobbyists. In 1979 Wirot, in his book Turtles of Thailand, referred to Manouria emys phayrei as Geochelone nutapundi, as he was apparently unaware of Blyth's earlier description and classification of this taxa. Since Manouria (Geochelone) emys phayrei was the more commonly imported of the two during the 1970's and 1980's, many authors writing about captive individuals in the late 1970's and early 1980's, referred to these animals as Geochelone nutapundi or "nutapundi" phase.

Asian brown tortoises were first bred in captivity at the Honolulu Zoo in 1978 after they were moved to large, tree shaded, grassed outdoor enclosures with natural mud wallows (soak holes). Specimens of both subspecies continue to breed well at the Honolulu Zoo to this day. The initial success at Honolulu was quickly followed by a zoo in Holland keeping their tortoises under large greenhouse conditions. Successful breeding of Asian brown tortoises has more recently occurred at the Fort Worth and Toledo Zoos.

Behavior of Female Prior to, During, and After Egg Laying

Several days before a female is ready to lay she will gather surface leaf litter. By back sweeping this material with her forelimbs from as far as 30 feet away, she constructs a large nest mound. Just before laying, she will enter the mound headfirst to further shape it to her needs. Next, she will exit the mound and place her cloaca over the shallow depression in the earth below the center of the mound and lay up to 51 eggs. When the laying is completed, with her rear feet she will gently cover the eggs with a shallow layer of earth creating a small mound within the large mound of earth, leaves, and debris. Next, through back sweeping with her forelegs, the female adds to this initial protective cover. She may continue this activity for up to several more days, creating a nest that may rise to over 2 1/2 feet in height and over 5 feet in width.

Amazingly, the female will guard the nest against all intruders for up to two or three days. She will push away any perceived predator from the nest with the front of her shell. If that technique doesn't stop the predator or if the predator moves in a manner too quickly to be dealt with effectively, the female tortoise will move to the top of the mound and lie flat on the top of the nest with her limbs extended out and downward, thus making digging into the nest more difficult. If the predator digs out one side of the nest, the female tortoise will often move to that area and back sweep additional material into the new opening. The unique guarding behavior only lasts several days and then the female Asian brown tortoise totally loses interest in the nest mound. These behaviors, first documented at the Honolulu Zoo, have since been recorded in a number of captive collections where reproduction has occurred under simulated natural conditions.

It is interesting to speculate about the evolutionary significance of this nest mounding and egg guarding behavior. A female of this species lays an egg clutch that is larger than recorded for any other tortoise species. Also, according to the existing data I have compiled from the different collections where females have produced eggs, they lay but once a year or in some instances, less frequently. A tortoise, even a relatively large tortoise, moves too slowly and awkwardly to fend off a monitor lizard, mongoose or other mammalian predator for any substantial period of time. However, with the help of frequent downpours, she may be able to temporarily confuse a passing predator. After several heavy rainstorms, her nest may very well look and smell like any other pile of forest leaf litter. This instinctive set of rather complex nest mounding and egg guarding may influence the odds in favor of her substantial genetic investment.