Living with sulcata (I) 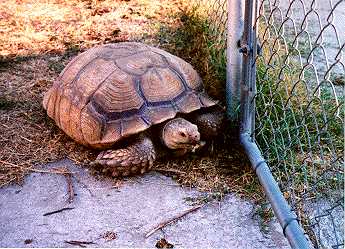 I have often wondered what it is about turtles and tortoises that draws certain people to them. For me it was a fascination with giant tortoises. This life-time interest in large tortoises is what brought me to living with the African sulcata.

Most people are familiar with the giant tortoises that we see in zoos: the Galapagos tortoises of the Galapagos Islands and the Aldabra tortoise of the Aldabra Atoll. In the same genus (Geochelone) with these is the African spurred tortoise (Geochelone sulcata), the largest mainland tortoise species in the world. They are reported to grow to over two hundred pounds in weight and thirty-six inches in length.

Last fall, when I first heard that there was a possibility of me acquiring a pair of sulcata I had a lot of questions. What do they eat? What would they need for housing? How much are they like the desert tortoise? Answering these questions helped me to ensure that adequate husbandry facilities were ready when the pair eventually arrived.

The first thing that I did was to look them up in our copies of Pritchard's Encyclopedia of Turtles and Ernst and Barbours' Turtles of the World. Sulcata come from the southern Sahara Desert region, an area of Africa which crosses the countries of Senegal, Mauritania, Mali, Chad, Sudan, and Ethiopia. I also found that almost nothing is known about sulcata in the wild. Almost all the available information is on captive animals.

From talking to people who either keep or know about sulcata and from discovering that the region of Africa they inhabit is semi-arid and in the tropical zone, I had a few clues to go on. Like the desert tortoise sulcata are vegetarians and most of their natural food is dried grasses and leaves from desert scrub. In the wild they have to walk and nibble to get their fill.

Housing was the next question. Sulcata like to be dry and warm. Unlike our desert tortoise they do not hibernate. (Being in the tropics, the southern Sahara doesn't cool down like the Mojave desert.) So, I wanted something that would be dry, something that we could keep warm, and something that the tortoises could go in and out of easily. We found a product called a "Dogloo". It is a large dog house, made out of molded plastic, in the shape of an igloo. It is insulated to keep the heat in and has a clear plastic door that hangs over the opening.

We set up the "Dogloo" on our covered patio so that it is sheltered from the winter elements. To provide heat, I put a "pig blanket", a solid flat piece of fiberglass with heating coils of wire inside that is made for hog farmers, on the floor of the Dogloo. The pig blanket does not cover all of the area of the floor. This is important because it allows the sulcata to move on and off the pig blanket and control their own temperature without having to leave their house. From the dome of the ceiling, I hung a red heat lamp to give them a "hot spot" if they want to warm up, with enough space to move away if they need to cool down. An indoor-outdoor thermometer mounted outside provides temperature readings on the inside and outside of the Dogloo, for my information.

Now I was ready for Clark and Lois (the Super-tortoises). Being wild-caught, no one really knows how old they are but I was told by tortoise "pundits" that they are probably about ten years old. Clark weighed thirty-one pounds and Lois weighed thirty-five pounds. (A very large desert tortoise might weigh sixteen to eighteen pounds.) When I first got the sulcata they were very shy. However, I learned that they will do anything for an apple, so this way we got to know each other.

I think they have a sweet tooth. In addition to baled alfalfa, Purina Pure Pride 100 horse chow, and grass and plants growing in the yard which are available to them at all times, every three or four days they are offered an assortment of vegetables (especially carrots, potatoes, broccoli) and a little fruit.

I soon found out that, fortunately, the Dogloo is easy to clean. I couldn't believe the size and amount of "poop" that these guys produce. After disconnecting the pig blanket and taking it out, I clean their houses by pouring buckets of warm water into the Dogloos and scrub the floors and walls with a long handled scrub brush. When the scrubbing is done it is easy to dump the dirty water out. This has to be done every other day. These are big guys.

Their strength is amazing, especially if you are used to having desert tortoises. Clark and Lois can move just about anything. Woodpiles, patio furniture, and 8 feet tall ficus trees in 20 gallon containers are their specialties. And, much like the desert tortoise, the male will ram the female. When Clark rams Lois it sounds like thunder. Given the violence of the ramming it is hard to believe that this is natural, but I know it is and that it has been going on for millions of years.

It is quite clear from my reading that sulcata are solitary animals. This makes sense because it must take a lot of desert scrub to support a single animal. For this reason, a friend gave me a second Dogloo for my birthday, which I set up just like the first one, so that Lois and Clark could each have their own. To my surprise, they stayed together in the old Dogloo. Eventually one of them ventured into the new Dogloo. I thought for sure that then through some sort of agreement they would each claim their own house. This was not the case. Most of the time they were in the same Dogloo. It might be the old one or it might be the new one, but they were always together. More recently they are spending a night or two apart, but most of the time they are together in the same house.

Now that they are accustomed to their new surroundings, they are getting more and more trusting. In the past week, I had a special treat to offer them -- a whole head of Romaine. Just to see what would happen, I sat down on the patio floor and showed it to Lois, who was grazing on the alfalfa bale 10 feet away. She came over and literally climbed into my lap in order to eat that head of lettuce. That night, when I went to check that they were both in for the night, she saw my feet and came right out begging.

My wife and I also keep 2 Egyptian tortoises (Testudo kleinmanni) which come from Africa north of the Sahara. It has been fascinating for me to see how alike the two tortoise species (sulcata and kleinmanni) are. Much of their actions and food preferences are similar, but on a totally different scale. The sulcata are so large and the kleinmanni are so small -- 5 or 6 ounces in weight and under 4 inches in length.

I enjoy Clark and Lois very much. I hope that they will be around for many years. I am grooming our one year old grandson to take care of Clark and Lois in the future.

The Cost of Living with sulcata

To give readers an idea of the costs involved in housing and maintaining these large tortoises, Stan has provided his sulcata set-up shopping list with approximate prices [ed. note: 1993 prices]. Stan advises readers to shop around, for example Dogloo prices may vary from $60 to $100. Expect ongoing maintenance costs (foodstuffs, electricity, veterinary check-ups etc.) of $20-$50 each month.