Box turtles of the genus Terrapene only occur in North America. The name Terrapene is appropriately derived from a native American (Algonquian) word for turtle. In the United States, two separate species groups are recognized: the common box turtle group (carolina) and the ornate group (ornata).

Four races of the common box turtle (T. carolina) are recognized in the U.S., where they occur in the eastern states from Maine down to the Mexican border and beyond. Various "intergrades" also occur. These "intergrades" show characteristics of two or more of the sub-species and are found in regions where the sub-species overlap. 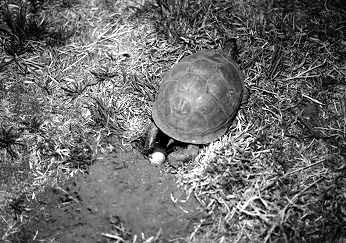 Three-toed box turtles are small turtles, usually with plain brown or olive carapaces sometimes patterned with yellow lines or marks. The plastron is the same drab color as the carapace. The skin is brown or gray, with variable amounts of red, orange, yellow or white on the head and front legs. As their name suggests, they usually (but not always) have three toes on their hind feet. Sexing them can be difficult. Both sexes have relatively short tails and flat plastrons. If a pair is available, the male can be seen to have a larger tail with the vent opening located past the edge of the carapace. Males often have the bright red eyes shown by many male box turtles, and commonly have areas of solid red or white color on their heads and fore limbs. If kept in a confined area males will attempt to mount the females throughout the spring and summer months.

I maintain an adult pair that I have had for over 6 years in a 10 feet by 12 feet pen. They spend much of their time buried in the mounds of compost provided for them with only their heads showing, ever alert for any food item that may go by. While having the typical preference for live food (snails and worms) and fruit, they seem to eat more green vegetables than my other box turtles. I supplement this diet with Purina trout chow, which they eat with gusto. I have observed mating only in the spring. The female is prolific, laying multiple clutches of 4-5 eggs, and always late at night. I usually harvest the eggs and incubate them indoors, but for the last 3 years hatchlings have appeared in the enclosure from undetected nests. Finding these hatchlings can be a real chore. They tend to remain hidden under the compost. I rear the hatchlings indoors on a moist potting soil substrate that is deep enough for them to bury themselves in. The hatchlings will learn to eat trout chow, and I have raised them to adulthood almost entirely on trout chow and small amounts of seasonal fruits. 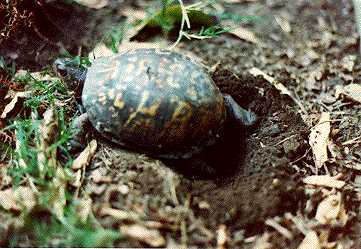 Eastern box turtles are among the most attractive and widely known of all turtles. An eastern box turtle has even appeared on a U.S. postage stamp! Their appearance is very variable. The basic color of the carapace may be light brown to black, but both the carapace and the skin are brightly marked with yellows and oranges. I acquired two males in 1981 when I first moved to Los Angeles and thirteen years later they are still thriving. Until 1988, when I moved into a house with a yard, the two box turtles lived in a glass tank in my living room. They were easy to keep, they always defecated in their water bowl and they would let me know when they were hungry by banging on the glass! Soon after getting them, I learned that snails were these box turtles' all time favorite food. Several times a week my living room would resound with the crunch of snail shells and slurpy grunts; box turtles are noisy eaters! I obtained the snails by hunting in the alleys of Santa Monica late at night. To reduce the risks of pesticide poisoning I purged the snails by feeding them romaine lettuce for a few days before offering them. Now, the two box turtles live in enclosures outdoors. Each enclosure has a small pond, piles of lawn clippings and leaves, decaying tree stumps, and shrubs to provide shade. They find a greater variety of insects and bugs out there than I could ever provide.

Eastern box turtles are protected from collection in most states in which they occur, and quite rightly so. I adopted a rather battered but healthy female, who was turned into the adoptions committee by a member who was moving. A long term captive, she settled down well. After three months I put her out with the larger of the males and she subsequently laid a clutch of 5 eggs. The eggs were incubated in damp vermiculite at 30° C (86° F). Five hatchlings emerged after 68 days.

Gulf Coast box turtles are the largest of the common box turtle group, and tend to have the most pronounced flaring of the rear marginal scutes. The skin color is typically a uniform deep black or brown color, broken only by white on the chin and lower jaw. The black or brown carapace may be marked with faint yellow spots or striations. Males have longer tails than the females and a definite plastral concavity, but commonly lack the red eye color found in other male box turtles. Males are very aggressive towards each other, and should be kept apart to avoid the risk of a fatality.

These turtles hail from the very humid south and in captivity spend considerable time in water. One male I have rarely leaves the pond, where he feeds on trout chow along with my red-eared sliders. He has hibernated in the pond under water for the last four winters. The other male takes an occasional soak, but seems content to remain partially buried in vegetation in the damper areas of his enclosure. He spent his short hibernation period buried in the ground, like most of my other box turtles.

Florida box turtles typically have white or yellow radiating lines on their carapace, and superficially resemble ornate box turtles. However, they have two narrow stripes on the head; the body shape is narrower and more elongate, and the carapace is very domed; like the other common box turtles they have a dorsal keel or ridge running along the carapace above the spine; and the plastron tends to be relatively plain. Like triunguis they have only three toes on their hind feet. Like major the rear marginal scutes are often flared.

Florida box turtles are protected and are rarely seen in California. Philip Brown, who has kept one for over 6 years, tells me that his shows a preference for animal matter (dog food and invertebrates). However, the turtle is still growing. Its preference for meat may simply reflect the more carnivorous habits characteristic of young box turtles. 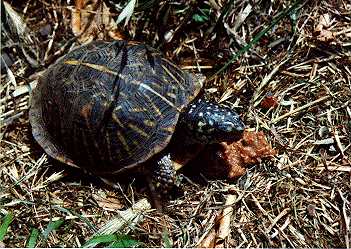 Ornate box turtles are small, pretty, very distinctive turtles with yellow striations on the brownish carapace and plastron. As with other members of the genus Terrapene, they have a hinge on the plastron that allows them to completely close their head, tail and limbs inside their shell. Ornate box turtles differ from the common box turtle group by having a strong pattern of radiating lines on each scute on the plastron (generally plain in T. carolina). The ridge along the carapace above the spine found in the common box turtle is replaced by a yellow line on the carapace. Ornate box turtles also tend to be of a more pugnacious attitude than other box turtles.

Mature male ornate box turtles are splendid creatures. In addition to their ornamental shell markings they often have solid green heads and purple tongues, and may have red or yellow markings on the front legs. They also have larger tails than the females, often have red eyes (light to dark brown in females and immature males), and havein-turned claws on the rear feet that aid in gripping the female during mating.

There are two sub-species of ornate box turtle found in the United States. The ornate box turtle (Terrapene ornata ornata) from Indiana and eastern Wyoming south to Louisiana and New Mexico, and the less commonly seen desert ornate (Terrapene ornate luteola) from southeastern Arizona, New Mexico and the Trans-Pecos region of Texas south into Sonora and Chihuahua Mexico. The luteola form has thinner but more numerous striations on the carapacial scutes (The second pleural scute bears 11-14 radiations in luteola compared to 5-8 in ornata). Occasionally the pattern on very old luteola specimens has faded, giving a more uniform straw-yellow or greenish color to the shell. Perhaps reflecting its wide range, the physical appearance of T. ornata ornata is variable, and intergrades occur where the sub-species overlap.

Although parts of their natural range are drier and less humid than those of the common box turtle, they still tend to be most active during and after rainstorms. Like other box turtles, they must have free access to water in captivity.

Healthy ornates are very active and alert turtles. They do poorly in small cages and should be housed outdoors unless they are too young or too ill. I house them in a large partly shaded pen. The pen has a small, shallow pond that they drink from--shallow because ornate box turtles tend to be poor swimmers and may drown in deeper water. I am constantly amazed at the surprising speed and dexterity with which they hunt and chase down beetles, water roaches, and crickets in their enclosure. They are also very temperamental. They will run out and beg for food when I walk by, yet if I offer the food by hand they may (depending on their mood) hiss at me even while they eat it! They are most active in the early morning or evening, but will come out of their hiding places in the piles of leaf litter and grass clippings to chase bugs whenever I soak down their pen. Several times a week I offer them Purina trout chow, occasionally low fat cat food (e.g. Hill's Science Diet Feline Maintenance Light which contains only 3% fat) fruit, nightcrawlers, snails or crickets.

Unfortunately, although commonly offered for sale in pet stores, wild-caught adults do not acclimate well and invariably need special care and attention. The majority of ornate box turtles found in the pet trade seem to be in a highly distressed state, suffering from severe malnutrition, dehydration, and bacterial and parasitic infections, and they rarely thrive without extensive and expensive medical treatment. I get many calls from helpless new owners who have bought an ornate box turtle that within hours or days showed classic signs of illness - refusal to eat, eyes swollen or jammed shut, a white tongue, runny nose, occasional gasps for breath. With considerable effort (including rehydration, force-feeding and systemic antibiotic therapy) many of these animals can recover. However, adjusting to captivity can be as difficult for wild caught ornates as the most delicate of exotic reptiles.

I generally advise against buying any turtles through the retail pet trade. If you wish to acquire a box turtle, try the adoption committee, or buy captive bred hatchlings. Obtaining healthy animals is well worth the wait.