The briefing points outlined below are meant to form a guide to the potential impact of the proposed Fort Irwin expansion on the threatened Desert Tortoise. The author welcomes your comments/additions. 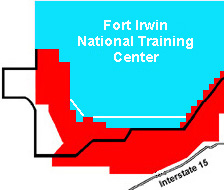