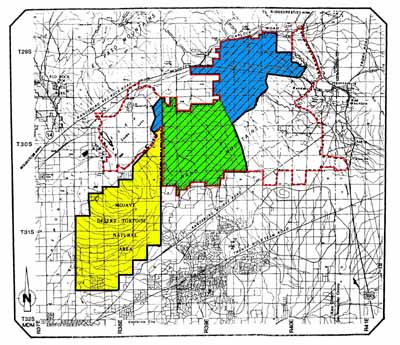 The Bureau of Land Management (BLM) established the 17,877 acre Western Rand Mountains Area of Critical Environmental Concern (ACEC) in the 1980 California Desert Conservation Area Plan.  The purpose of the Western Rand Mountains ACEC was to protect and restore the habitat and populations of the desert tortoise in the Rand Mountains and adjacent portions of the Fremont Valley. The area is designated critical habitat and was once home to large numbers of desert tortoise. In addition, the ACEC plays an important role in connecting the tortoises of the Desert Tortoise Natural Area to those in the east.

The ACEC lies within the Rand Mountains Fremont Valley Management Area for which a Management Plan was produced in 1993. The Rand Mountains Fremont Valley Management Area includes areas that have been popular with off-highway vehicle (OHV) enthusiasts for several decades and the habitat has undergone severe degradation due to this human impact. Although a vehicle route system was established under the Plan, compliance has remained an issue.

The Bureau of Land Management has now instituted an emergency closure of the Western Rand Mountains ACEC to motorized vehicles following the filing of a notice of intent to sue the by the Center for Biological Diversity for the Bureau's failure to comply with the terms and conditions laid down in the FWS Biological Opinion. The BLM press release is given below.

The Bureau of Land Management (BLM) is implementing an emergency closure of approximately 29 miles of BLM routes (R5, R50, R40, R15, R25, R35, R 37, R12 and R 48) to all motorized vehicle use within the Western Rand Mountains Area of Critical Environmental Concern (17,877 acres), located in Kern County, California. These interim closures will not affect the remaining 100 miles of designated routes in the Rand Mountains Fremont Valley Management area. The BLM will also close all unauthorized routes and trails to vehicle use in the Western Rand Mountains ACEC.

BLM is implementing this interim closure on the 29 miles of designated routes to further protect the desert tortoise and its critical habitat within the Western Rand Mountains ACEC. This closure was made necessary by the high incidence of noncompliance exhibited by public land visitors operating off-highway vehicles on closed routes and traveling cross country within the ACEC. This closure becomes effective March 29, 2002, and will remain in effect until a Record of Decision is signed on the West Mojave Plan, which is expected to be completed by June 2003.

The authority for this emergency interim closure is found in 43 CFR Subparts 8341.2 (Special rules) and 8364.1 (Closure and restriction orders). All designated routes entering the ACEC will be posted with public notices and standard motorized vehicle closure signs. Management fences or barriers will be installed at key access points to block entry by motorized vehicles.

The ACEC will remain open for all other non-motorized uses currently allowed under 43 CFR. Exemptions to this closure include vehicles conducting official government business, which shall be allowed on closed routes and areas as authorized. Official government business includes public service emergencies, resource monitoring and research, management activities, and other actions authorized by BLM's Ridgecrest Field Office manager. Signs have been posted at places near or within the closure area.

Documents and maps of the affected areas are available at the BLM Ridgecrest Field Office located at 300 South Richmond Road in Ridgecrest, California.

The Record of Decision, closure document and Environmental Assessment are posted on the BLM California website at: http://www.ca.blm.gov/news/reports_docs/2002/randrouteclos_mar02.html.
For more information contact the BLM Ridgecrest Field Office at (760) 384-5405.