Kristin H. Berry and I first crossed paths in 1969 when I was an undergraduate zoology major and she was a teaching assistant in Zoology 107A–107B, "Natural History of the Vertebrates" at the University of California, Berkeley, taught by among other people, Robert Stebbins. The course involved weekly field trips (Saturday mornings from 8 am to 12 noon), lectures and laboratory work. I can still vividly recall Kristin showing me her pet Colorado River toad (Bufo alvarius) and how it would lunge after a pencil point on the wall, thinking that a fly had come into view. Our paths have crossed again many times since then at Desert Tortoise Preserve Committee meetings, the Desert Tortoise Council and at CTTC meetings. 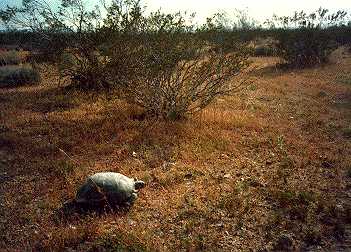 Kristin's current job title is Supervisory Wildlife Biologist and Senior Scientist at the Bureau of Land Management's California Desert District Office in Riverside, California. She has a B.A. in biology from Stanford, an M.A. in biology from UCLA and a Ph.D. in zoology from UC Berkeley. She is a founder of the Desert Tortoise Preserve Committee, the Desert Tortoise Council, and a long-time member of CTTC.

This interview took place in southern California on June 7, 1992 a few days into the Earth Summit meeting at Rio Di Janeiro, Brazil.

MG (MG): How did your interest in tortoises and in conservation develop?

KB (KB): I grew up on the desert edge. My back yard in China Lake, where I lived from age 4, was right on the desert, next to creosote bushes. My father had desert tortoises in a pen in the yard, and I used to catch lizards as a child. After receiving my bachelor's degree, I worked for the Department of Defense at China Lake but did not find that satisfying and went back to school, first at UCLA, then at Berkeley. My dissertation was "The Ecology and Social Behavior of the Chuckwalla (Sauromalus obesus)".

When I left graduate school, I had my own company doing survey work and other studies. Jack Edell of the California Division of Highways (forerunner of CalTrans) was looking for someone to do a study for a desert tortoise relocation project along route 58 between Kramer Junction and Mojave during the widening of the road from two to four lanes. Glenn Stewart told Jack that I could do this since I had studied the chuckwalla and knew about long-lived herbivorous reptiles. Tortoises were taken from the route 58 area and translocated to China Lake. It's interesting to note that one of the Boy Scouts who was helping on this project to get community service credit towards being an Eagle Scout was Peter Woodman, who today has his own company doing similar work! I became interested in land distribution issues and realized that for the work I wanted to do I would need to be in an agency which dealt with these issues. I began working with the BLM at that time.

KB: During 1971-1972 with the backing of John Brode of the California Fish and Game Department, I proposed to the BLM the creation of what has become the Desert Tortoise Natural Area (DTNA). By the fall of 1973 the DTNA existed on the map (although with smaller boundaries), and the area was closed to off-road vehicles. In 1974, I, along with Betty and Warren Forgey, Bev Steveson, Laura Stockton and Charlotte and Albert Gould, formed the Desert Tortoise Preserve Committee (DTPC). I had known the Goulds since I was five, living in China Lake. Albert Gould got us incorporated and served as our first treasurer. Betty Forgey was president of a garden club district and had invited me to speak and was instrumental in launching the effort.

MG: How do you think the DTPC/DTNA has fared?

KB: We've done amazingly well! A small, grass-roots organization has dealt with 400 separate land-owners, fenced the area and created a 39 square mile protected area. I am particularly pleased that another generation has come along to continue the effort – people like Roger Dale, Jun Lee, Ryan Campbell and Jayne Scales. There is certainly the possibility that surrounding areas will also be protected in the future.

MG: What about the formation of the Desert Tortoise Council?

MG: How has the Desert Tortoise Council been doing?

KB: I think that the most remarkable accomplishment of the Desert Tortoise Council has been its success in getting people to the table. We still need to get more of the military into the fold. By starting out with state reports, which required people to report on what was going on in their own state, people became embarrassed to report that nothing was happening — and felt it necessary to do fieldwork! The Council didn't really take off, however, until the mid to late 80s. We used to beg people to speak — but now we have to restrict speakers because the Symposium has become so popular.

MG: What about your involvement with CTTC?

KB: I began my involvement with the CTTC in the early 70s. I was first asked to speak in 1973 or 1974. Since then I've seen the CTTC and the Southwestern Herpetologists Society move a long way towards conservation issues. In the beginning I mostly met people who knew about animal husbandry but very little about the desert.

MG: What about Upper Respiratory Tract Disease? Do you think that captive releases have contributed to this in the desert?

KB: Unfortunately, it does look like the release of captives both by governmental entities as well as by individuals has spread this disease. Where human contact has occurred, Upper Respiratory Tract Disease is present, whereas in sites remote from human contact, even given the same factors such as drought, there have not been the massive die-offs that we have seen. Factors such as grazing and ORVS use enter into this also.

A few days ago I spoke with Elliot Jacobson [a veterinarian at the University of Florida who is leading a team researching Upper Respiratory Tract Disease]. He reported that there is now solid proof that the organism responsible for the illness is a Mycoplasma. Pasturella seems less relevant.

MG: Can you say something about the conservation of the Western Mojave?

KB: The Western Mojave is really three deserts — the Western, Central and Southern Mojave. Of these, the Central Mojave, encompassing Ft. Irwin and its surroundings, is the only remaining area which has not had significant impact from grazing, off-road vehicle use or settlements. To save even part of this area will require the efforts of everyone.

MG: What about grazing issues?

KB: Cattle, sheep and burro grazing cause damage to individual tortoises by trampling. Possibly even more important are indirect effects on the environment caused by introduced weeds from Europe and Asia. Where grazing has occurred over long periods, these weedy species have flourished. Unlike the native species these are highly flammable. Many more fires are occurring, and fires alter the food supply and cover in a deleterious fashion.

I closed by asking Kristin about the desert in general. I had been reading an article about the noted author and environmentalist Wallace Stegner [Los Angeles Times, 6/7/92] which Kristin had also noted. I mentioned how Stegner had been quoted as noting the "austerity" of the West and his hopes for a better future with a rejuvenated environmental movement.

MG: What about the role of the desert?

KB: I think that the desert and its animal and plant species deserve to be protected. They deserve to be allowed to live on our planet and they have a lot to offer people – from new medicines to an escape from civilization – a spiritual rejuvenation. As I grow older, I find that material things are less important, and that refreshing the spirit is much more meaningful.

KB: We need to constantly push the envelope – the possibility of change. In thinking back, it is the special people who I have met over the years and their interactions which have meant the most to me. People like Jim St. Amant, Phil Pister, Robert Stebbins, Glenn Stewart, and the newer generation such as John Behler, Mike Klemens, and Elliot Jacobson and his research team. Don't forget CTTC members, too.

MG: It's been twenty years.