Answers to your questions about chelonians

What is the difference between a turtle and a tortoise?

In common usage in the United States, the word turtle is an inclusive word that refers to all species of water turtle, sea turtle, box turtle, terrapin and tortoise. The word tortoise refers to a particular type of turtle that is well adapted to life on land.

Scientists group all turtles together in the "order" known as TESTUDINES. This order includes about a dozen living "families" of turtle. Tortoises are a specialized clade or subgroup of the order TESTUDINES that are known as the Testudinidae.

According to Dr. Kristin Berry, the following distinction is made between the terms "turtle" and "tortoise" in the US:

"A tortoise is a land dwelling turtle with high domed shell and columnar, elephant-shaped hind legs. Tortoises go to water only to drink or bathe. In contrast, the word turtle is used for other turtles: pond turtles, river turtles, box turtles, musk turtles, sea turtles, etc.

So, tortoises form a subgroup that can be distinguished from other groups of turtle, but they are "turtles" nonetheless.
Michael J. Connor

What do you call a group of turtles?

Do turtles have teeth?

While some prehistoric turtles had them, no modern turtles possess real teeth. Instead, all of the turtles alive today have very sharp beaks which they use to bite with. Hatchlings emerge from their eggs using what is commonly known as the egg-tooth or caruncle. This is located at the front of the upper jaw and typically it disappears a few months after the turtle hatches. It is a modified scale and not a real tooth.
Michael J. Connor

How big is the largest desert tortoise?

The largest recorded desert tortoise is "Maximus," a captive tortoise measuring 15 inches in carapace length and weighing 23 pounds (St. Amant, 1976).  Maximus had been a pet for many years and was turned into the California Department of Fish and Game office in Long Beach in the 1970's. 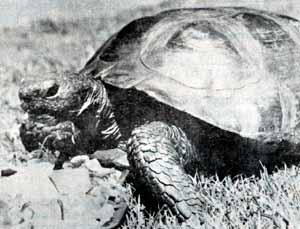 What is the largest species of tortoise/turtle?

Chelonians are measured with calipers. One end of the caliper is placed at the edge of the carapace (upper shell) immediately above the head, and the other end is placed on the carapace edge above the tail. This is known as the straight line carapace length.

The famed giant tortoises that inhabit islands in the Galapagos Archipelago and Indian Ocean are the largest of the living land turtles. A male Galapagos tortoise, Geochelone nigra, from Isla Santa Cruz that has been captive-raised at the Life Fellowship Bird Sanctuary in Florida may well be the largest tortoise known. He weighed 356 kilograms (785 pounds) in 1988 and by 1996 was close to a stunning 400 kilograms (882 pounds). An Aldabra tortoise, Geochelone gigantea, living on Bird Island in the Seychelles is probably the world's largest free-roaming tortoise weighing in at a hefty 305 kilograms (672 pounds). In contrast to these island giants, the largest mainland tortoise – the African spurred tortoise, Geochelone sulcata – reaches a mere 90 kilograms (200 pounds) or so.

Two rare Asian softshells vie for the title of largest freshwater turtle. A Pelochelys bibroni from southeast Asia measured 51 inches long and is estimated by Dr. Peter Pritchard to have weighed 400 pounds. The narrow-headed softshell Chitra indica, commonly reaches 36 inches and is rumored to reach as much as 72 inches. According to Pritchard's Encyclopedia of Turtles the alligator snapping turtle, Macroclemys temminckii, is the USA's largest freshwater turtle at 76 kilograms (167 pounds). Among the Pleurodire (sideneck) turtles, the largest is the South American Arrau, Podocnemis expansa. Females may reach 90 kilograms (200 pounds).

The largest of all living turtles is a sea turtle. At an impressive six feet in length (and possibly longer) with a weight of some 590 kilograms (1300 pounds) the leatherback sea turtle, Dermochelys coriacea, is the true turtle giant!
Michael J. Connor

Update to the "largest freshwater turtle" with documentation

The largest freshwater turtle recorded to date is the Yangtze Giant Softshell (Rafetus swinhoei) male in Hoan Kiem Lake in Hanoi, Vietnam. He was captured in 2011 to treat some wounds and was released later in the year.


Can turtles breathe through their butts?

Turtles have a single rear vent that is referred to as a cloaca.  Feces, urine, and eggs all exit a turtle through this cloaca, so not surprisingly it is quite elastic and the opening can stretch considerably. In a small number of water turtles, the cloaca also possesses a pair of well-developed, vascularized sacs that lead off it called bursae.  These cloacal bursae are surrounded by the same thin membrane as the rest of the cloaca.  Gas exchange can occur across this membrane when a turtle is submerged and allow some oxygen to reach the blood.

In most species this makes a minor contribution to respiration. However, one species of turtle from Australia has taken this to extremes. The Fitzroy River turtle (Rheodytes leukops) can pump water in and out of its cloacal bursae such that it can obtain as much as two-thirds of its oxygen supply through this route. [Source: Aquatic respiration and diving in the freshwater turtle, Rheodytes leukops by Craig E. Franklin. Proc. Physiol. Soc.]
Michael J. Connor