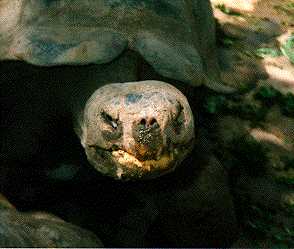 The Galápagos Archipelago lies some 600 miles west of Ecuador on the west coast of South America. A remarkably diverse biota has developed in this isolated ecosystem. Early explorers found that many of the islands were populated by an abundance of giant tortoises, and these unique islands are one of the last few places on earth where giant reptiles are still a dominant life-form. The Galápagos tortoise exhibit at the Los Angeles Zoo offers visitors a fine opportunity to observe three of these gentle giants interacting in a naturalistic setting. On a cool, overcast day in March, I had the pleasure of interviewing their keeper, Ms.Kathy Nevins, on behalf of the Tortuga Gazette. Most of the interview took place at the exhibit. When we arrived at the exhibit, the three tortoises were inside their barn, having an after-lunch nap.

Mary Cohen (MC): Please tell us something about your background. How did you train for such a specialized job?

Kathy Nevins (KN):I have been a keeper at the Los Angeles Zoo for the past 15 years, the first 2 1/2 years as a part-time keeper before securing a full-time position. After I had worked for four years as a full-time reptile keeper the Galápagos tortoise exhibit was opened, and I asked that it be added to my string.

KN: Currently, we have 3 Galápagos tortoises on exhibit. Flash Darwin, our female, is 30 years old and weighs 225 pounds. Her carapace is domed. She was hatched in the Galapagos, and was among one of the last groups to be collected. She is probably from Isabela Island. Now, of course, all tortoises in the Galápagos are fully protected by law. Flash is very smart and is a very good climber. By the way, the name Flash Darwin is an adoptive name. This means that her care and feeding is funded by a member of the public who has given her this name. Bubba and Clarence, our two males, are on breeding loan from the Houston Zoo. The two males were collected from the Galápagos by the 1927 Townsend expedition. They arrived in Houston in 1928, when they weighed about 13 pounds and were probably about three years old. Now, 67 years later, Bubba weighs approximately 500 pounds. He has a domed carapace. He is very slow-moving, slow to react and even a little stubborn. Clarence, weighs somewhat more than 500 pounds. His carapace is also domed but with a slight flare at the front and back edges. Compared to Bubba, Clarence is very smart and very mellow.

MC: When did Clarence and Bubba arrive? How did they react to their new surroundings?

KN: They came by truck from Houston and arrived on October 16, 1991. Clarence is very smart and settled right in to the routine. Bubba took more coaxing but has settled in well. They are both healthy, active tortoises in their prime.

MC: How did Flash react to the newcomers?

KN: She was so unhappy! She did a lot of biting the first week. Then she became depressed. She stayed in a corner of the tortoise barn for six weeks; she wouldn't come out and wouldn't eat. We were worried. Then one day she came out of the barn, pushed Clarence aside and ate his meal!

MC: What sort of foods do you feed them?

KN: They are fed three times a week. At each meal they each get one pound of bananas, one pound of carrots, one pound of apples, two bunches of spinach and a papaya. They have quite a sweet tooth. They also eat lawn grass and cactus (Opuntia) pads in their enclosure. If there is enough lawn grass, they don't eat the spinach. But there isn't much lawn left; because they are so heavy, the grass never has a chance to grow back! They have eaten a whole garden of cacti that was planted in the exhibit. They eat the entire plant, branches, stem and all. The Opuntia is close to gone and the column cactus has disappeared.

MC: Do they have favorites among these foods?

MC: Do they need nutritional supplements, such as vitamins or minerals?

KN: They don't seem to. Their diet has been reviewed by a nutritionist and was found to fulfill all their needs.

MC: Do they produce a lot of droppings?

KN: They produce large quantities of droppings! These are collected by the staff and discarded immediately for sanitation reasons.

MC: What can you tell us about their senses of sight and smell?

KN: They have a very well-developed sense of smell; they smell all foods before eating. They are definitely attracted by the colors red and yellow. Perhaps, the flowers and fruits eaten in the wild are red or yellow. We used to have someone working here who wore yellow rubber boots. She couldn't stand still in their enclosure without having the Galaps nipping at her boots!

MC: What medical problems have you seen in the Galapagos tortoises?

KN: The Zoo has two staff veterinarians who provide medical treatment when it is needed. They diagnose problems and give the right medicines in the prescribed doses. Like other tortoises the Galaps can get respiratory infections. These are treated with the antibiotic Baytril. Baytril is useful in large reptiles because there is less risk of the kidney damage that can occur with some antibiotics, and there is no need to give extra fluids. Nemex is used for internal parasites. Scrapes and bruises are treated with antibiotic creams.

MC: Can you describe a typical day in the life of the tortoises?

KN: It varies depending on the weather. The barn is made of concrete and has a heated floor to keep them warm even when the nights are cold. If the weather is warm, "the boys" are often banging on the door to get out at 8:30 when I get to work. They have this Laurel and Hardy routine, where they'll both try to get through the doorway that isn't wide enough for two. If it's cooler, they want to stay in the barn, where the heated floor keeps them warm. Flash is the last to leave the barn; she minds the cold much more than the males. When they are all out, the barn is washed with disinfectant (Rocal or Nolvasan) and water. This is done every day. On feeding days, they are fed between 12 noon and 1 p.m., when they are most active. This is when they are most likely to eat all of their food. They are put in their barn and the door is locked before I leave at 5 p.m.

MC: What happens if they're outside when you come to "tuck them in" for the night? How do you get a 500-pound animal to go where you want it to go?

KN: I tickle them on their hind legs on either side of their tails. It is a very sensitive area and they respond by moving ahead. To get them to go left, I tickle more on the left leg, and the same for the right.

MC: Do the tortoises have more than one keeper? Do they recognize individual keepers?

KN: I'm their keeper on weekdays. On the weekends, someone else cares for them. They don't appear to recognize individuals. They are friendly to everyone, even the public. They like having their necks stroked. I think this behavior may be related to the interaction seen in the wild between Galápagos tortoises and a type of Darwin's Finch known as the small ground finch. The tortoise stretches out its neck in response to being touched on its front legs by the finch; and the finch removes ectoparasites, such as ticks, which have attached themselves. This is beneficial for both animals. The finch gets a meal and the tortoise gets rid of parasites.

MC: Throughout the year, do the tortoises have cycles of peak activity and food consumption?

KN: Not as much as temperate-climate animals do. The Galápagos are desert islands in a cold sea close to the equator. The tortoises do not hibernate and they eat year round. They slow down - become torpid - when the weather is very hot or very cold, but only slightly. They eat similar amounts of food summer and winter, a little more in summer. We feel they don't need to eat more often than 3 times a week, because the nutritional content of their meals is so high compared to what they would get in the wild by foraging.

MC: There's a pond in their enclosure, although now it's empty. Do they like soaking in water?

KN: We fill the pond for them in warmer weather. They enjoy soaking in water very much. They soak frequently in the wild when water is available to them... and they love the rain! Especially a warm rain but even when it's cool. They walk around in the rain, with their necks stretched out full length. Sometimes they lie down with necks and legs outstretched and just enjoy.

MC: You mentioned earlier that Bubba and Clarence are here on breeding loan. Has any breeding behavior been seen?

KN: So far the boys have proved willing, but Flash has not. The Zoo has a third male tortoise, a Darwin Volcano tortoise (Geochelone elephantopus microphyes), who is now on breeding loan at the Gladys Porter Zoo in Brownsville, Texas. He is with a female of the same subspecies.

The Tortuga Gazette would like to thank Harvey Fischer, Curator of Reptiles at the Los Angeles Zoo, for his help in facilitating the interview.