The Yucatan box turtle is the southernmost variety of North American box turtle and is further isolated geographically from its living relatives than any other species or subspecies of the genus Terrapene. Confined to the tropical deciduous scrub-forest of the northern and central Yucatan Peninsula in Mexico, these box turtles may have evolved from an extinct variety, T. putnami, to which the more familiar Florida, three-toed, and Gulf Coast box turtles also owe part of their ancestry (Milstead, 1969). The stimulus to the evolution of these modern races is dated to the early Pleistocene, after the land bridge connecting Florida and Yucatan was inundated, thereby linking the formerly inland Gulf of Mexico with the Atlantic Ocean. However, there are no fossil box turtles yet known from tropical Mexico to strengthen this hypothesis.

Originally, Boulenger had classed the Yucatan box turtle as a full species when he described it in 1895. The closely related Mexican box turtle, T. c. mexicana, occupies a rather small portion of the Mexican Gulf Coast north of the port of Veracruz extending nearly to Brownsville, Texas. It too had been described originally as a full species, in 1849. The geographical isolation of these two Mexican box turtles, and their strong similarities to one another, later led them to be grouped by Smith (1939) as related subspecies, T. mexicana mexicana and T. m. yucatana. However, the exhaustive anatomical analyses by Milstead (1960) on modern and fossil Terrapene have led to a consensus that the Yucatan box turtle is as closely related to its gringo cousins in the carolina group as to T. mexicana. Both are now accepted as subspecies of T. carolina. What distinguishes the Yucatan box turtle to the taxonomist is the interfemoral seam of the plastron, which as a rule is relatively longer (21% of the length of the hind lobe) than in other races of T. carolina (Smith and Smith, 1979). But, seeing a group of living Yucatan box turtles makes an indelible impression of their uniqueness which surpasses the mathematical formulas and paleontological insights of taxonomists.

The meager literature and published photographs of T. c. yucatana fail to do justice to the striking sexual dichromatism which they exhibit. "Sexual dichromatism" means differentiation by color between the sexes. Familiar examples among other chelonians are the bright red iris of male eastern box turtles in contrast to the brownish-yellow iris of the female, and the dark mandible of male spotted turtles contrasted with the pale pink chin of the female. In Yucatan box turtles, the differences apply to coloration of neck, head, iris, carapace and underside of the posterior marginal scutes.

Before describing these differences, however, it is best to provide a definition which embraces both genders yet sets them apart from other recognized subspecies of T. carolina. The most succinct definition is that provided by Ernst and McBreen, 1991, reproduced here in full:

"The carapace is long, high-domed, with the third vertebral elevated into a small hump, and with little flaring of the posterior marginals. It is tan or straw-colored with dark radiating dashes or black scute borders. Each hind foot has four toes."

The only significant distinction in their somewhat differently worded description of T. c mexicana is that the latter has but three toes on the hind foot. Neither account mentions coloration of the soft parts, thus minimizing the readers likelihood of becoming confused by male vs. female turtles. 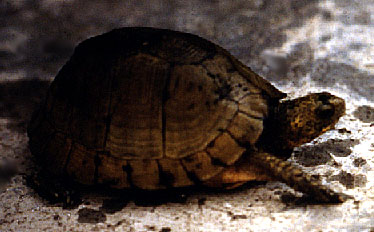 A look at male and female Yucatan box turtles might lead one to conclude that 2 different species of box turtle were being scrutinized. The carapaces of female T. c. yucatana bear out Ernst & McBreen's curt description. Of 9 living females, all captives, which I examined in November 1992, most had relatively unmarked dull yellowish green or brownish carapaces, sometimes with vague, darker mottling. Interestingly, the few which had a semblance of a dark radiating pattern on the large scutes appeared to be the oldest. Only the youngest-looking females had black scute borders, and these were extremely narrow. Traces of a central keel were more prominent on two of the females than on any of the five males examined. The plastrons of the females varied from nearly solid black (particularly the smallest specimen seen, which measured 136 mm in carapace length) to nearly unblemished dirty yellow. Overall, many female Yucatan box turtles from a distance could easily be mistaken for the least colorful of three-toed box turtles.

The soft parts of the females presented greater contrasts. Young-looking specimens often had pale brownish limbs and heads, mottled with fine black dashes or spots, recalling the head pattern of some western pond turtles. In other females, the soft parts were an unspotted yellow or brown. The eyes were brownish yellow as well. The sides of the neck and chin blended into one another, gradually darkening towards the shoulders.

Male Yucatan box turtles are boldly pigmented, in some cases resembling Disney cartoon characters in their riotous coloration. The heads, relatively massive in most cases, were always predominantly white, sometimes suffused with pale blue on the eyelids or along the neck, and even pinkish near the tympanum. The pale coloration with a hint of blue extended to some of the forelimb scales as well. The throat was invariably paler than the sides of the neck. The iris of the males varied from off-white to the same yellowish tint exhibited by the females.

In shell coloration, the contrasts were equally startling. All of the box turtles with the darkest carapaces turned out to be males, as did two apparently very senior specimens whose carapaces were of a nearly uniform pale horn color. In one of these, there was a definite reddish cast to the entire carapace. The black scute borders were always present and seemed widest in younger males – overwhelming the lighter centers, in fact. The plastrons had virtually no hint of concavity but were all predominantly pale – a minority trait among the larger sample of females seen. Most remarkable among all the males was the presence of distinct reddish-brown smudges along the underside of the posterior marginals. This crimson halo proved diagnostic of masculinity and is useful in determining the gender of a Yucatan box turtle too shy to stick out its head. In the two oldest-looking males, the underside of the anterior marginals was adorned with red as well. 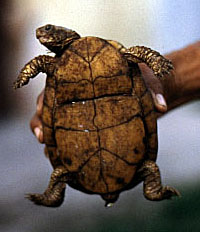 Moving from physical description to an account of the natural history of this tropical box turtle is to enter a no-man's land of speculation and hearsay. In fact, nothing is known. The Yucatan box turtle does not appear to be abundant, and many rural folk commented wistfully that the species seems to be dwindling. Aside from its general scarcity, the Yucatan box turtle is reported to be active only during the rainy season, which extends from June until early November. Like many of the other five native turtles of the peninsula, box turtles are often encountered during or after rains. No one said you could just go out and look for box turtles with any hope of success; some might see as many as half a dozen one year, none the following. Box turtles sometimes are found after the slashing and burning of fallow fields prior to planting; the carapaces of many museum specimens and quite a few of the thriving captives I saw last November bore evidence of charred scutes or healed lacerations accidentally inflicted by machete-wielding peasants. Sometimes a box turtle found roasted alive has been consumed by the farmer chancing upon such a barbecued bonanza, but people laughed when I asked whether anyone ever sought out box turtles for food. Like people everywhere, some Mayas think turtles are really neat and keep them within their stone-walled compounds as free-ranging "pets". The alpha male in one such barnyard menagerie had been in captivity for over 10 years.

In Yucatan Maya dialect, the box turtle is called either "ac" or "coc ac". A fascinating account of the cosmological significance of the box turtle to the number-obsessed Late Classical Maya is provided by Dr. Lawrence Mills (1979) in his article "House of Turtles". A visit to the House of Turtles at Uxmal is an experience of transcendent reverence for the chelonian enthusiast of any background. Some of the best preserved box turtle figures carved on the cornice ringing the building are cannily lifelike. Incidentally, Mills' photograph, as those of Basile (1991), Ernst & Barbour (1989), and Ernst & McBreen (1991) depict adult males. The only published photographs of females of which I am aware are the black and white inch-long prints of museum specimens presented in Milstead (1969).

Only a handful of individual captive Yucatan box turtles in the U.S. are known to me. At a zoo in Yucatan where 2.2 box turtles were confined with other native turtles plus young Morelett's crocodiles and a single red-eared slider, the dominant male box turtle ruled the roost. This vividly colored alpha male preferred to intimidate the other hapless male that shared its small territory, rather than trying to mount the females or seek food. In fact, the dominant male would not allow his rival a moments peace and would charge over to attack him if he so much as dared to show his white face. At my suggestion, the browbeaten male, whose anterior marginals actually bled from frontal attacks by the dominant male, was removed to another enclosure. The alpha male seemed to calm down and began mounting the females, with about the same passion as he had scourged the other male. When I brought the turtle group a "treat" of raw beef, beef liver, and various fruits from the reeking public market, the Rhinoclemmys areolata attacked the meat like terrestrial piranha while the box turtles became ecstatic at the sight and taste of fresh orange sections. In the wild, they probably eat just about anything.

Keepers at the zoo find hatchling turtles of various species at the beginning of the rainy season, but were uncertain as to which were neonate box turtles. I twice heard of small juvenile or half grown box turtles turning up in large outdoor private enclosures into which only adults had been released, but hatchlings were never found nor looked for.

To date, the Yucatan box turtle has been recorded from only 12 locations in the three Mexican states comprising the northern half of the Yucatan Peninsula. The undisputed U.S. expert on Yucatan turtles, Dr. John Iverson, has found more of the mysterious endemic Yucatan mud turtle (Kinosternon creaseri) than all previous researchers combined, but says he has never encountered a T. c. yucatana in the field (personal communication).

The pressures of human population growth and habitat loss in Yucatan diminish the long-term prospects of one of its oldest and least known inhabitants, Terrapene carolina yucatana. Were this turtle to vanish before we understood its natural history would be tragic indeed.